ASHEBORO – Performance speed painter Tim Decker will wow the crowd at the next installment of the Friends of the Library Sunset Signature Series at 7 p.m. Saturday, March 14, in downtown Asheboro’s historic Sunset Theatre.

Decker’s highly interactive, upbeat performance is free and the public is invited.

The Sunset Signature Series is sponsored by the Heart of North Carolina Visitors Bureau, the City of Asheboro and the Friends of the Randolph County Public Library.

Decker is a nationally-touring artist who creates celebrity and patriotic portraits in front of a live audience. Each painting takes 4-7 minutes to complete and the whole experience is set to music.

A showman whose performances have been described as “spellbinding” and “knock-out,” he has appeared on the major television networks and the Hallmark channel, and the reality television show Hell’s Kitchen.

Decker performs at numerous fundraisers each year, where his appearances have raised over $1.5 million for various charities.  In 2014, he joined Late Night host Jimmy Kimmel at a Las Vegas fundraiser for the Dave Rice Foundation, where two paintings created that evening brought $15,000 during an auction. Decker painted a portrait of Kimmel before the event, which the host himself bought for a $10,000 contribution to the foundation.

The Sunset Theatre is located at 234 Sunset Avenue. Seating is first-come first-served.

For further information, call the Heart of North Carolina Visitors Bureau at 800-626-2672. 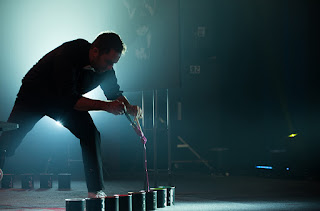