FRANKLINVILLE – The Franklinville Public Library will offer holiday food–related classes for adults and children during the first two weeks in December.

“Holiday Cooking for Kids” will show youngsters how to make festive popcorn balls in holiday colors, 4:30-5:30 p.m. Wednesday, December 19. (Be aware that this event involves peanut butter, for those with allergy concerns). Sign up by December 10.

The classes will be led by Kimberly Titlebaum of the Recipe for Success nutrition program at UNC-Greensboro, and will take place at the Franklinville United Methodist Church fellowship hall.

ASHEBORO – The bluegrass/old time music team of Tommy Edwards and LaNelle Davis will present a selection of original and seasonal tunes in “A Country Bluegrass Christmas” at 7 p.m. Tuesday, December 4, at the Asheboro Public Library.

The pair will be joined by a Stan Brown on banjo and Gerald Hampton on mandolin for the performance, which is sponsored by the Friends of the Library. It’s free and the public is invited.

Edwards is lead singer and guitarist for The Bluegrass Experience, and host of Life 103.1’s “Bluegrass Saturday Night.” A professional performer for over 35 years, Edwards has twice been named World Champion Bluegrass Guitarist. He also served for 30 years in the Randolph and Chatham county schools as a teacher, coach and administrator.

Davis, from eastern North Carolina, initially was drawn to clogging, touring and performing extensively as a dancer and caller. She took up the bass when a friend moved and left one at her house, and since has performed with numerous nationally-known old-time bands and individuals. 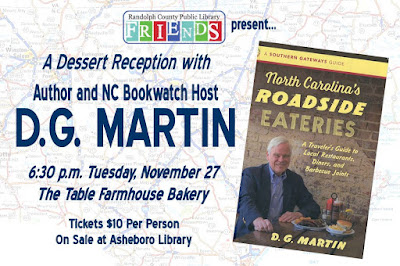 ASHEBORO – North Carolina Bookwatch host D.G. Martin will talk about his book North Carolina Roadside Eateries: A Traveler’s Guide to Local Restaurants, Diners, and Barbecue Joints at 6:30 p.m. Tuesday, November 27, during a Friends of the Library dessert reception at The Table Farmhouse Bakery.

Tickets for Martin’s visit are $10 and are on sale at the Asheboro Public Library, 201 Worth Street. Tickets must be purchased in advance of the event.

In addition to his hosting duties, Martin pens a weekly column on books, politics and related topics that appears in 40 North Carolina newspapers. Martin graduated from Davidson College, where he played basketball, and Yale Law School. He’s also a former Green Beret.  He practiced law in Charlotte before joining the University of North Carolina system, where he served as Vice President for Public Affairs and chief legislative liaison. 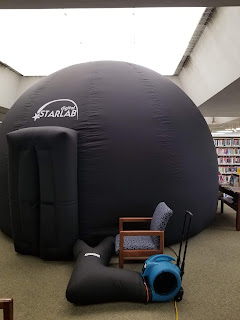 ASHEBORO – Step into a space, journey through the solar system and meet Earth’s closest celestial neighbors on Thursday, November 15, at the Asheboro Public Library.

All ages are invited to free sky shows at 10 a.m., 2 p.m. and 4 p.m. in a StarLab Portable Planetarium set up in the central part of the library. The planetarium holds 6-8 people; multiple presentations of the 10-minute show will take place at each scheduled time if necessary to accommodate all attendees.

The StarLab, an  11-foot-high by 16-foot-diameter inflatable dome, is on loan from the State Library of North Carolina, which has made four of the portable planetariums available around the state. A laptop/projector system displays the sky show and guides viewers through the program.

The StarLab will leave Asheboro for its next library location in a few weeks.