ASHEBORO – “The Voice of the Tar Heels” — Woody Durham — will be remembered by his sons Wes and Taylor Durham in a Friends of the Randolph County Public Library event at 6 p.m. Wednesday, April 17, at Pinewood Country Club.

Tickets are $30 and are on sale now at the Asheboro Public Library, 201 Worth Street. Heavy hors d’ouevres are included in the ticket price; there will be a cash bar.

Taylor and Wes will share memories about their sportscaster father and stories from his career. Woody’s wife, Jean, also will be on hand for the event.

Woody Durham, who passed away in 2018, was known as the “Voice of the Tar Heels” during his 40-year career as play-by-play announcer for the University of North Carolina men’s basketball and football programs.

Wes Durham has been the radio play-by-play voice of the Atlanta Falcons since 2004, and is in his sixth season as the primary play-by-play announcer for the Atlantic Coast Conference on Fox Sports South and the ACC Network. He is an 11-time winner of the Georgia Sportscaster of the Year award from the National Sports Media Association.

ASHEBORO  -- Experience history through “The Spirit of Harriet Tubman” as Gibsonville performer Diane Faison brings the famed abolitionist to life at 7 p.m. Tuesday, March 26, at the Asheboro Public Library.

The one-woman show is sponsored by the Friends of the Library in honor of Women’s History Month. It is free and the public is invited.

Tubman, born in 1822, escaped a brutal existence as an enslaved person to establish the Underground Railroad and advocate tirelessly for abolition. She served in the United States Army during the Civil War, and afterwards became an advocate for women’s suffrage.

An art teacher in North Carolina and Virginia for 25 years before retiring, Faison wanted students to feel history, rather than just researching it.

She studied Tubman’s life and developed her one-woman play, which her husband, a history teacher, asked her to perform for his students.

Since then, she has performed multiple times each month for close to 30 years in schools, colleges, libraries, churches and retirement homes. A Winston-Salem native, Faison holds a bachelors of arts in art appreciation from North Carolina Central University. She has received grants from the Winston-Salem and Alamance arts councils, and the Puffin Foundation. 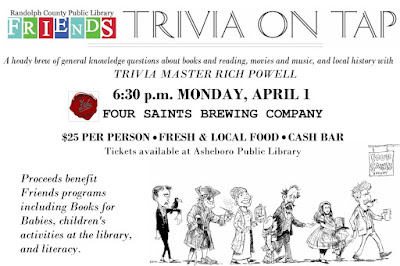 ASHEBORO – Test your knowledge of books and authors, pop culture, and local history – and support the Friends of the Randolph County Public Library – at “Trivia on Tap,” 6:30 p.m. Monday, April 1, at Four Saints Brewing Company.

Ticket price is $25 per person, and includes food and the trivia competition. Proceeds go to support Friends programs such as Books for Babies, children’s activities at the library, and literacy.

Tickets are on sale at the Asheboro Public Library, 201 Worth Street. Call 336-318-6801 to reserve tickets or for more information.

Emcee Rich Powell returns for the friendly competition, in which participants will answer three rounds of trivia questions in teams. Participants may sign up in groups as teams, or simply join a team on arrival.

The name of the winning team and its members will be displayed on the Friends Trivia Champion trophy at the Asheboro library.

There will be a cash bar. Four Saints is located at 218 S. Fayetteville St. in Asheboro.