Her appearance is sponsored by the Friends of the Library. It’s free and the public is invited.

Castle, author of The New Southern Garden Cookbook among more than a dozen other cookbooks, will tell stories and reflect on the roles that food traditions play in Southern families, lives, history and culture.

A contributing editor for Southern Living magazine who writes regularly for a number of magazines and newspapers, Castle is the subject of five short documentaries on Southern food produced by A Spoken Dish, a storytelling project of the Southern Foodways Alliance. She also is a popular speaker and demo chef at culinary events across the South and is asked to cook on television from time to time.

Her cooking classes garner a loyal following. One journalist observed, “Sheri Castle is one of the most brilliant recipe developers I know, a terrific writer, and her cooking classes are equal parts crucial info and laugh-until-you-drop trenchant observation.” Her colleagues say she has one of the best palates in the industry.

A native of Watauga County, Castle now lives in Fearington Village. She says she is fueled by her beloved Appalachian Mountains, farmers’ markets, excellent bourbon, and the pursuit of the right word.

Friends of the Library Cake-Off

Anyone who wants to get in on the culinary action can bake a cake and enter the first ever Friends of the Library Cake-Off.

Cakes will be juried by three local bakers at the Sheri Castle event, and cash prizes will be awarded. Criteria will include taste, appearance and ease of preparation.

To enter, pick up an entry form at the Asheboro library or visit www.randolphlibrary.org/cakeoff.

Bianchi’s concert, sponsored by the Friends of the Library, is free and the public is invited.

Bianchi’s repertoire will include music from 18th century Germany and pieces from 20th century Argentina.

Born in Williamston, New York, Bianchi began performing at weddings and cafes while still in his teens. The attention he received playing concerts throughout western New York led to appearances in prestigious guitar festivals.

From 2005-2007, he toured with country acts Young Guns and Chace Roberts. He began solo classical tours in 2009, and has performed throughout the southeast, Texas and the mountain west.

He has performed at the Asheboro library twice previously.

He lives in Lanier Harbor near Buford, Ga., where his time is solely devoted to his music.

ASHEBORO – Users of the Randolph County Public Library can now search the library catalog, place holds, download ebooks and more on their phones and tablets with the library’s new mobile app.

The app is available for both Apple and Android devices – just search for “Randolph library” in your app store.

“A library’s job is not just to have books and other material available for the public, but to enable people to find that material quickly and easily,” says Library Director Ross Holt. “With more and more people relying on their phones and tablets or iPads, the mobile app meets them where they are and gives them immediate access to the library.”

In addition to typical uses like searching for books or DVDs and placing holds, and downloading electronic materials, the app also links to new arrivals, library hours and locations, and online resources.

The app also makes it quick and easy for users to check their library accounts to see when borrowed items are due, renew items and manage items on hold.

“Another neat feature is the capability to scan any book’s ISBN barcode, so if you’re at a bookstore and see a title you’re interested in, you can scan the code and the app will automatically tell you if the book is available at the library,” Holt says.

The app also includes a “book river” at the top that provides immediate links to best sellers and other top titles. It also enables users to communicate with the library to ask a question, suggest a purchase or reserve meeting space.

For more information or assistance using the app, contact the library at 336-318-6803 or visit your local library. 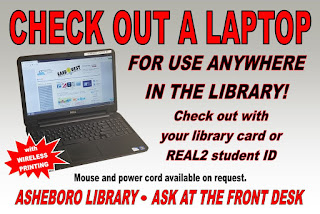 ASHEBORO – Users of the Asheboro Public Library’s public computers now can take their work anywhere in the building and go online with free WIFI as the library begins lending laptops for in-house use.

Anyone with a library card in good standing or a student ID through the REAL2 program, and who is eligible under the library’s Internet use policy, can check out one of 10 laptops for the day, or for a set period of time if all the computers are in use and there’s a waiting list.

Need a space to spread out documents while you’re online? Check out a laptop and take it to a study table.

Need a quiet place to study or write? Nestle at a café table by the window.

Need to do some work while watching your kids in the Children’s Room? Take along a computer.

Need to work in a small group? Take computers to a diner booth or a conference room.

Ordinarily use your phone or tablet with the library’s WIFI but have work that requires more intensive computer use? Borrow a laptop.

“The library offers all types of spaces for people to use. Now we’re enhancing the ways that people can use those spaces,” Holt says.

The laptops provide everything the library’s desktop computers offer, including Internet access, productivity programs like Word, Excel and Powerpoint, and even wireless printing.

If laptop lending at the Asheboro library proves a success, Holt says, it can be expanded to the six other branches of the Randolph County Public Library.

It’s also a test run for potential checkout of laptops to take home, Holt says. The library already loans mobile WIFI hotspots for use outside the library.

Laptops are available to anyone 16 and older who has agreed to the library’s Internet use policy, and those age 11-15 whose parents have authorized their use of the Internet at the library.

The tour, open to 25 participants, is free but tickets are required. Tickets are available at the Asheboro Public Library Circulation Desk; there is a limit of two per person.

Owen will demonstrate some of the techniques he uses in creating pottery masterpieces that are in high demand all over the world. Following the demonstration, participants can stroll the retail gallery.

A light Southern tea will be served.

Owen’s studio is located at 105 Ben’s Place in Seagrove. Travel to the studio is on your own.

Sponsored by the library’s Margaret C. Taylor Culinary Arts Collection, the classes were offered at no cost to attendees.

ASHEBORO – The Soviet Union’s contribution in World War II, and its influence on war crimes trials that followed, will be the topic of a talk by Dr. Thomas Earl Porter of  N.C. A & T University, 6:30 p.m. Monday, October 21, at the Asheboro Public Library.

The talk is free and the public is invited.

Porter, professor of Russian and Modern European History, and author of several books and more than 50 articles, will discuss the fate of Soviet POWs in Nazi Germany, as well as the legal groundwork and evidence collection undertaken by the Soviets for the Nuremberg war crimes trials. He also will touch on Soviet efforts to minimize the assault on Russian Jewry by the Germans, and share some little-known aspects of the ensuing cold war between the US and the USSR