ASHEBORO – Go “In the Footsteps of Daniel Boone” with award-winning author and storyteller Randell Jones at 6:30 p.m. Tuesday, March 12, at the Asheboro Public Library.

Boone led one of the fullest and most eventful lives in American history as a hunter, frontier guide, wilderness scout, militia leader, woodsman, land speculator, merchant and more — and spent 21 years in North Carolina.

Jones will  trace the life of Boone by placing Boone’s adventures on the landscape and taking the audience to some of the 85 sites across 11 states, from Pennsylvania to Missouri, where the pioneer hero left his mark.

“In the Footsteps of Daniel Boone” is based on Jones’s book by the same name. Jones, who lives in Winston-Salem, also is author of Scoundrels, Rogues and Heroes of the Old North State, Before They Were Heroes at Kings Mountain, and several other titles about the pioneer era and the American Revolution.

Jones’s appearance, part of the Road Scholar series, is made possible by funding from the North Carolina Humanities Council, a statewide non-profit and affiliate of the National Endowment for the Humanities, and the Friends of the Library.

ASHEBORO – Join Laura Evans of the La Leche League of Greensboro for “Milk for Everyone: An Overview of Breastfeeding Benefits and Stages” at 10:30 a.m. Friday, March 8, at the Asheboro Public Library. The talk is free and expectant/nursing mothers are invited.

Evans will cover the benefits of breastfeeding for families, transition to work, introduction of solid foods and other topics, with time for discussion.

A working mother of two, Evans is a volunteer with the La Leche League of Greensboro.

ASHEBORO – Son of a Methodist minister and a classical pianist, Jim Avett grew up in a home full of love and music, where he learned the importance of hard work and honest living.

Avett, a lifelong songwriter and musician, only turned to full time performing after retiring from a welding business he operated for 35 years to provide for his own family.

Now with four albums to his name and international acclaim, Avett will anchor the second installment of the 2019 Friends of the Library Sunset Signature Series at
7 p.m. Friday, March 15, in downtown Asheboro’s historic Sunset Theatre.

The performance, sponsored by the Heart of North Carolina Visitors Bureau, the City of Asheboro and the Friends of the Randolph County Public Library, is free and the public is invited. Seating is on a first-come first-served basis.

Avett’s shows are a combination of beloved country tunes, his original ballads and stories he tells to introduce the songs. His performances have been characterized as spending the evening on the front porch, singing and talking with a good friend.

A North Carolina native who now lives in Cabarrus County, Avett released his first album, Jim Avett and Family, in 2008. It featured sons Scott and Seth — the Avett Brothers — and daughter Bonnie.

His next album, 2010’s Tribes, featured original songs ranging from soulful love ballads like the title track to the more lighthearted “Fight with a Bottle of Booze” – and a murder ballad that will ring especially true with Randolph County audiences, “Naomi.”

Listeners could find classic country and early rock ‘n’ roll influences on Second Chances in 2010, in which Avett drew on his life experiences to write songs about love, boyhood memories and loss. He followed that with For His Children and Ours in 2017.

Celebrate Dr. Seuss’s birthday with The Cat in the Hat at all Randolph libraries 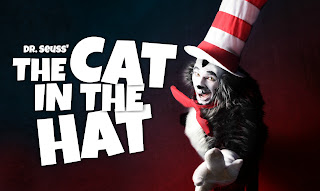 ASHEBORO -- Meet The Cat in the Hat and other crazy characters during the first week in March as all seven public libraries in Randolph County celebrate the birthday of Dr. Seuss.

The Cat, a.k.a. storyteller and illusionist Caleb Sigmon, will appear for a performance and meet-and-greet at all the libraries as follows:

The performances, sponsored by the Friends of the Randolph County Public Library, are free and the public is invited.

The fun, interactive events will feature live actors, puppets, music and audience participation, followed by a Meet-and-Greet with the Cat.

Sigmon visited the Asheboro library in December as the Grinch, drawing an audience of over 300.

Performing a variety of shows 150 times a year with a unique blend of magic, drama and storytelling, Sigmon is a mainstay of libraries, schools, churches and performing arts centers.  He has appeared at venues ranging from the Virginia Beach Boardwalk to the Johnny Carson Theatre in Lincoln, Nebraska.

LIBERTY – Join Liberty-area potter and historian Brenda Hornsby Heindl for “Poetry and Pottery: Free and Enslaved Potters Working in the South,” at 5:30 p.m. Tuesday, February 19, at the Liberty Public Library.

Hornsby Heindl will talk about the intersection of pottery and poetry as both free and enslaved potters navigated their lives.

Her talk is free and the public is invited.

Learn about heart health for women in Asheboro library class

ASHEBORO – Learn about management and prevention of cardiovascular disease in “The Heart of the Matter for Women,” 6:30 p.m. Thursday, February 21, at the Asheboro Public Library.

Sheri Millikan, Clinical Service Manager, Cardiac Services, at Randolph Health, will help attendees identify risk factors that increase the chance of heart disease for women, and review the most recent data on menopause, inflammation and Vitamin D associated with the illness. Participants will be able to develop a plan for improved heart care.

North Carolina’s long growing season is almost here. Join Ben Grandon of Randolph County Cooperative Extension for “Beginner Backyard Gardening” at 6:30 p.m. Tuesday, February 26, at the Asheboro Public Library, as he offers an overview of what supplies and equipment you may need, answers gardening questions, and talks about services available at Cooperative Extension to ensure a bountiful harvest.

Grandon’s talk is free and the public is invited.