ASHEBORO – The Randolph County Historic Landmark Preservation Commission will consider a nomination of the Searcy/Waddell ford and ferry site on Deep River for designation as a Local Cultural Heritage Site during a meeting at 2 p.m. Tuesday, March 28, in the Historic Randolph County Courthouse, 145 Worth Street, Asheboro.

The body also will consider designation of the Corporate Seal of the County of Randolph as a Local Cultural Heritage Object.

The meeting is open the public.

Searcy’s Ford crosses the Deep River in Brower Township near the Chatham and Moore County lines. William Searcy received the property in a land grant in 1761, operating a ford and later a ferry where the road from Chatham Courthouse to South Carolina crossed the river. Searcy’s family later sold the property to Edmund Waddell, a prominent business and political figure, who took over operation of the ferry.

In addition to being an important part of area road network during colonial and early statehood periods, the ford and ferry was the site where the Continental Army of General Nathanael Greene crossed the river on its march to South Carolina after the battle of Guilford Courthouse during the Revolutionary War. It also was the site of two skirmishes involving Loyalist commander Col. David Fanning.

The proposed designation also includes the Waddell Memorial Cemetery nearby, where Waddell and Windsor Pearce, one of Randolph County first justices of the peace, are buried. Searcy’s son William Jr., a captain of militia during the Revolutionary War, also is believed to be buried in the cemetery.

The seal under consideration is not the colorful one seen on the side of county vehicles, but a seal obtained by the Randolph County Commissioners in the late 1800s to authenticate official county documents. Known as the Corporate Seal of the County of Randolph, it consists of engraved plates in as seal press that imprint a three-dimensional image onto a document.

It is still in use.

The Historic Landmark Preservation Commissions was created in 2008 to identify, preserve and protect Randolph County’s historic landmarks, and to educate the public about those resources and about preservation in general. So far, the commission has designated 20 sites as Historic Landmarks, 16 places or buildings as Cultural Heritage Sites, and four artifacts or groups of artifacts as Cultural Heritage Objects.

To learn more about the commission and the sites and objects designated, visit http://www.co.randolph.nc.us/Visit-Randolph/Historic-Landmarks/sites. For further information, call the Randolph Room at the Randolph County Public Library, 336-318-6815
Posted by Ross at 5:12 AM No comments:

ASHEBORO – From the beginning, Americans have paid close attention to how their First Ladies dress, and have expressed opinions about these clothing choices.

Many women have copied a First Lady’s style, while others have wondered about possible political statements behind the choice of colors, style and designer.

In a lively discussion and slide show entitled “First Ladies and the Politics of Fashion,” 6:30 p.m. Monday, March 27, at the Asheboro Public Library, author Annette B. Dunlap will talk about the evolution of First Ladies’ fashion, including the impact fashion had on their public image and what their wardrobes selections revealed about their time periods.

Sponsored by the Friends of the Library, Dunlap’s appearance is free and the public is invited.

Dunlap, who delivered this talk recently at the Herbert Hoover Presidential Library, is author of Frank: The Story of Frances Folsom Cleveland, America’s Youngest First Lady — the only complete biography of this historical figure — and The Gambler’s Daughter: A Personal and Social History. Most recently, she published Charles Gates Dawes:  A Life, a biography of Calvin Coolidge’s vice-president.

ASHEBORO – “It’s All in Your Head: Brain Health and Wellness” is the topic of a talk by Dr. Mike Perko at 6:30 p.m. Monday, March 20, at the Asheboro Public Library.

Perko’s talk, sponsored by the Friends of the Library, is free and the public is invited.

Perko, a nationally-recognized wellness expert, says the human brain is a lifelong work in progress, and the saying “use it or lose it” has never been more accurate.

In his talk, he will explore the revolution in neuroplasticity (the ability of the brain to form new connections and reorganize itself), consider the effectiveness of brain games and discuss strategies for incorporating brain health into daily life.

Perko is a professor of Public Health Education at UNC-Greensboro. He holds a Ph.D. in health education and promotion from the University of Alabama.

He also serves as wellness advisor to the National Rural Electric Cooperative Association. 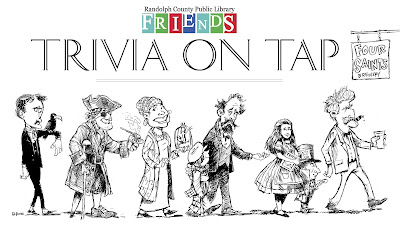 ASHEBORO – Test your knowledge of books and reading, movies and music, and local history – and support the Friends of the Randolph County Public Library – at “Trivia on Tap,” 6:30-10 p.m. Tuesday, April 4, at Four Saints Brewing Company.

Ticket price is $25 per person, and includes food and the trivia competition. Proceeds go to support Friends programs such as Books for Babies, children’s activities at the library and literacy.

Tickets are on sale at the Asheboro Public Library, 201 Worth Street, and the Friends of the Library Bookshop, 226 Sunset Avenue. Call 336-318-6801 to reserve tickets or for more information.

During the friendly competition, participants will answer three rounds of trivia questions in teams of up to four. Participants may sign up in groups as teams, or simply join a team on arrival.

Prizes (and bragging rights!) will be awarded.

There will be a cash bar. Four Saints is located at 218 S. Fayetteville St. in Asheboro.
Posted by Ross at 1:39 PM No comments: