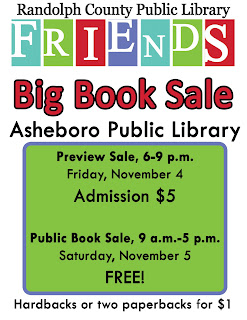 The Friends of the Randolph Public Library Bookshop stock room is stuffed to the gills, and construction on the adjoining Sunset Theatre is expected to start early next year.

So from 9 a.m.-5 p.m. Saturday, November 5, the Friends will hold a “Big Book Sale” at the Asheboro Public Library, 201 Worth Street. Admission to the sale is free.

There will be a preview sale from 6-9 p.m. Friday, November 4, also at the Asheboro library. Admission to the preview is $5.

The sale will feature over 3,000 used books. Hardbacks will go for $1 and buyers can get two paperbacks for $1 – half the usual prices.

Business at the bookshop, at 226 Sunset Avenue, will go on as usual. Hours are 10-2 Tuesday, Thursday and Saturday.

But the library sale will help prepare for the Sunset renovation, which will claim a portion of the bookshop’s sorting space and require some remodeling of the bookshop itself.

The bookshop will remain open as long as possible when construction begins, and reopen as soon as possible after it is complete.

The Lost Boys to descend on library’s Movie Monday

Long before the teen vampire heartthrobs of Twilight, there were The Lost Boys, the Asheboro Public Library’s monster Movie Monday at 2 p.m. October 24.

After moving to a small coastal town, 1980s icon Corey Haim discovers he must defend his family from a clutch of young vampires led by a pre-Jack Bauer Kiefer Sutherland.

The movie is free and the public is invited; refreshments will be served. Find our more at www.randolphlibrary.org/asheboromovies.html

Participants, whose work spans genres from ranging from children’s books to novels and nonfiction, include:

Access to computers and the Internet at the Randolph County Public Library enables county residents to get jobs, get healthy and get into school, according to local results of a national survey.

The library asked users of its computers and online resources to take the U.S. Impact Survey during a three-week period in September. The survey measured how people used free computer services at the library in the past year, and the impact the services had on their lives.

Jobseeking was a top concern of the 135 survey respondents. Sixty percent used library computers to search for jobs; 47 percent applied online or sent out resumes, and 22 percent were granted interviews.

Health and wellness also was a hot topic, with 43 percent of respondents using library computers to find out about diet and nutrition. Of those, 81 percent made changes to their diet.

Similarly, 38 percent sought information about exercise and fitness, and 87 percent of those who did so made changes in their exercise habits.

Fourteen percent applied for financial aid on library computers, with just under half of those saying they received it.

The survey also inquired about library computer use for business, e-government, e-commerce and civic engagement purposes.

olt said the library is working to address one of the most frequent suggestions for improvement expressed by respondents: more time online. The standard time limit of one hour per day is necessary to ensure fair access during busy times, Holt said, but automatic time-limit extensions allow as much as two and one-half hours, depending on the library branch, if no one is waiting for a computer.

The survey was created by the University of Washington School of Information with support from the Bill and Melinda Gates Foundation. It was offered to libraries nationally and is part of the first large-scale study of how people use computers in public libraries.

Holt said that though the survey measures the use of relatively recent technology, the results reaffirm a traditional role of the public library. “The founders of the public library movement in the United States, way back in the late 1800s, saw the library as ‘the people’s university’ – a place in the community where everyone could freely and continually educate and improve themselves and their lives. Clearly, this holds true today,” Holt said.

View all the survey results at www.randolphlibrary.org/impactsurvey.pdf.

Author Theresa Bane, whose expertise on all things vampire has landed her on national television programs, will talk about her work at 7 p.m. Thursday, October 27 at the Asheboro library.

The Halloween event, sponsored by the Friends of the Library, is free and the public is invited. Bane will sell and sign copies of her work.

Bane is author of Encyclopedia of Demons in World Religions and Cultures, The Encyclopedia of Vampire Mythology, Actual Factual: Dracula, Haunted Historic Greensboro, Folktales and Ghost Stories of North Carolina’s Piedmont, and more.

She has been featured on Discovery Channels’ “Twisted History: Vampires” as well as E!’s “10 Sexiest Vampires” for her knowledge and expertise on the undead.

She also recently published the darkly humorous The Bloodthirsty Weasels: On the Loose and Buck Wild, and is associate producer of audiobooks for Buzzy Multimedia.

When not writing, Bane travels to educate audiences about the differences between traditional mythology and horror fiction. A diehard gamer originally from the New York/New Jersey area, she resides in North Carolina with her husband, T. Glenn Bane. For more information, visit www.theresabane.net.