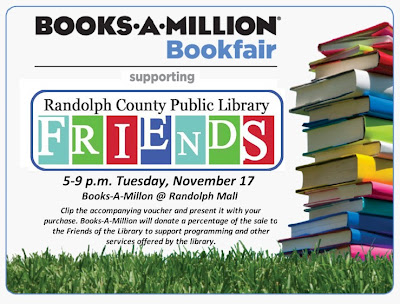 It’s all a part of life’s rich pageant as Inspector Clouseau drives his boss insane in The Pink Panther Strikes Again, the Asheboro Public Library’s Movie Monday at 2 p.m. October 19.

In this outing, Chief Inspector Dreyfuss, played by Herbert Lom, kidnaps a brilliant scientist and forces him to create a special ray gun in order to rid the world of Peter Sellers’ Clouseau once and for all.

The movie is free and the public is invited; refreshments will be served. Find our more at here, or call 318-6824.
Posted by Ross at 8:23 AM No comments:

Poet Barbara Presnell will read from her book Piece Work at a reception sponsored by the Friends of the Library at 7 p.m. Thursday, October 22, at the Randolph Arts Guild’s Sarah Smith Self Gallery. The reception is free and the public is invited.

Based loosely on the Asheboro textile manufacturing plant where Presnell’s father worked until his death in 1969, Piece Work uses the voices of workers to tell the story of an industry that once flourished in the region, shaping the lives of people who worked in the plant as well as those who lived among them, and chronicles the industry's demise in the early 2000s.

A portion of the poems was awarded the 2004 Linda Flowers Prize from the North Carolina Humanities Council. The full collection won the 2006 Cleveland State University (CSU) Poetry Center’s First Book Prize, and was published by CSU in 2007.

Asheboro native Presnell, whose poetry has appeared in many journals and anthologies, now lives in Lexington.

The reception is part of a series of events in October centering on the book. Randolph Community College will host the Touring Theatre Ensemble of North Carolina’s dramatization of Piece Work at 7 p.m. Tuesday, October 27, in the RCC Auditorium.

A discussion led by Presnell, Touring Theatre Artistic Director Brenda Schleunes and the cast will follow. The performance is free; seats can be reserved by calling 633-0244 (leave your name, phone number and number of tickets required) or at http://www.2009piecework.eventbrite.com/.
Posted by Ross at 8:20 AM No comments:

Roberts, Owen get duplicitous in "Duplicity"

Julia Roberts and Clive Owen are spies with secrets in Duplicity, the Asheboro library’s Movie Monday at 2 p.m. October 12.

Roberts and Owen play government agents who have turned their talents to corporate espionage, but who are finding it difficult to keep their clandestine love affair from intruding on their work.

The movie is free and the public is invited; refreshments will be served. Find our more at here, ww.randolphlibrary.org/asheboromovies.html, or call 318-6824.
Posted by Ross at 8:13 AM No comments:

“Medicare for Beneficiaries and Caregivers” is the topic of a presentation at 3 p.m. Wednesday, October 14, at the Asheboro library

Jo Ellen Needham, information and assistance director with the Randolph County Senior Adults Association and Senior Health Insurance Information Program coordinator, will present information for people who are new to Medicare or who want to learn about options for themselves or family members.