‘How the Grinch Stole Christmas’ returns to Randolph libraries 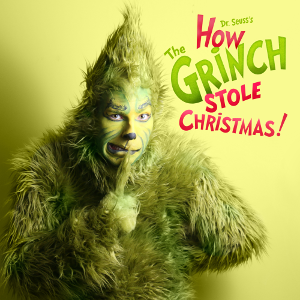 Everyone’s favorite grouch will visit each Randolph County Public Libraries branch and the Sunset Theatre during the week of December 5 as illusionist and storyteller Caleb Sigmon returns with his highly celebrated rendition of Dr. Seuss’s How the Grinch Stole Christmas.

The performances, sponsored by the Friends of the Library, are free and the public is invited.

Audience members’ hearts will grow three sizes as the classical story unfolds in a musical performance that includes live actors, puppets and lots of audience interaction.

The performance is free and the public is invited.

The group has played local venues including the Sunset Theatre, the NC Zoo, Randolph Community College, churches, corporate events and others for over 20 years.

Find just the right holiday gift for that special person (even if it’s just you!) during a special sale at the Friends of the Library Bookshop in downtown Asheboro, December 9-15.

The sale will enable the bookshop to make space for ongoing donations. The bookshop is located at  226 Sunset Ave.

Singer-songwriters Robert Burke Warren and Casey Noel will trace the life of Johnny Cash in words and music as the Friends of the Library Sunset Signature Series returns, 7:30 p.m. Saturday, October 22, at the historic Sunset Theatre in downtown Asheboro.

Their appearance is free and the public is invited.

Warren is author of Cash on Cash: Interviews and Encounters with Johnny Cash, forthcoming in September from the Chicago Review Press. In the book, Warren charts the evolution of Cash and his music through interviews Cash gave from the 1950s through the early 2000s, and provides his own commentary on Cash’s words.

During the performance, Warren will read from his book and perform some of Cash’s songs with Noel.

Warren is a novelist, educator, and music journalist based in the Catskill Mountains of New York. His music writing has appeared in Vulture, Paste, and Salon, among other publications.

As a performer, he played bass for the Queens, New York, based garage rock band The Fleshtones and has forged a career on his own as a singer-songwriter. He also presents educational rock ‘n’ roll performances for children as “Uncle Rock.”

Noel is a North Carolina-based singer-songwriter. A single entitled “Page 52” off her 2020 EP Not Just Pretty Words was added to Spotify’s Emerging Americana playlist. She has performed at Floydfest, Byrds Creek Music Festival and Bristol Rhythm and Roots, and has opened for roots musician Molly Tuttle.

Begun in 2018, the Sunset Series brings high-profile speakers and performers to the Sunset Theatre. It is sponsored by the Heart of North Carolina Visitors Bureau, the City of Asheboro and the Friends of the Randolph County Public Library.

The 2023 Sunset Series lineup, which is expected to feature six events, will be announced later this fall. ASHEBORO – Sign up for the “Cook Smart, Eat Smart Cooking School” hosted by the Asheboro Public Library at Randolph County Cooperative Extension, and learn how to prepare simple, healthy and delicious foods for you and your family.

Space is limited; call the Asheboro library at 336-318-6803 to sign up. Because each class sets the stage for the next one, participants should attend all four sessions.

Become more tech savvy in “Computer Basics for Adults,” offered at 2:30 p.m. Tuesday, September 13, and repeated at 10:30 a.m. Monday, September 19. This popular class is designed for those who are new to computers or who feel they need to have more instruction.

Participants will leave feeling confident about navigating the desktop; opening, closing and switching between windows; understanding operating systems; and storing information in various ways to keep it safe.

In “Understanding the Power of Email,” offered at 10:30 a.m. Thursday, September 8 and repeated at 3 p.m. Wednesday, September 21, learn how this popular communications tool works. Make an email account and learn about email account providers, composing and replying to emails, sending attachments, and dealing with spam in your inbox.

The library is located at 201 Worth Street.

ASHEBORO – Caregivers for people experiencing dementia are invited to participate in hands-on, multi-disciplinary training workshops presented by the Dementia Alliance of North Carolina at three Randolph County Public Libraries locations on August 30 and 31.

Called “Accepting the Challenge,” the training will be offered at the libraries as follows;

The sessions, conducted by Melanie Bunn, RN MS GNP, of the Dementia Alliance and hosted by the library’s Community Navigators, are free and open to all caregivers and potential caregivers. No registration is required.

The “Accepting the Challenge” training will be available on two DVD sets that can be checked out from the library.

Also available from the library are 11 sensory activity kits for caregivers to use people experiencing dementia. The kits provide simple, hands-on experiences that keep the person’s mind active and offer the comfort of a repetitive action.

All the kits include fidget balls and reusable water paint cards. Kits aimed primarily for women include a companion doll and a lacing activity card, while those aimed for men include a busy-work board and “Plumber Pals” pipes.

The dementia-care project was developed by Community Navigator Angi Polito and funded through a Bright Ideas Grant awarded by the State Library of North Carolina.

The grant is made possible by funding from the federal Institute of Library and Museum Services (IMLS) under the provisions of the Library Services and Technology Act (LSTA) as administered by the State Library of North Carolina, a division of the Department of Natural and Cultural Resources (IMLS grant number LS-252476-OLS-21).

For further information, call the Community Navigators at 336-318-6825 or email them at navigators@randolphlibrary.org.