Join UNC-Greensboro Associate History Professor Richard Barton at 6 p.m. Thursday, April 14, at the Asheboro Public Library, for a grounding in the nature of power for those who play the game of thrones. Barton’s research interest is the structure and nature of power in medieval France, which he ties in with events in the fictional kingdoms of the popular series.

Barton’s talk, sponsored by the Friends of the Library, is free and the public is invited.

Children ages 0-5 and parents/caregivers are invited to have fun with letters through storytimes, literacy-building games, crafts and other activities.

The schedule is as follows:


The events are part of Every Child Ready to Read, an initiative to help young children develop the building blocks of literacy so that they will be ready to learn when they start school.

Howell will discuss his recently-published book during a Friends of the Library event at 6 p.m. Tuesday, April 5, at the Asheboro Public Library. His talk is free and the public is invited.

Forsaken tells the chilling true story of Virginia Christian, an uneducated African American girl who was tried and convicted of murdering her white employer in 1912. Charlie Mears, a white man, covered the case as a rookie reporter.

The book chronicles the story of the trial and its aftermath as seen through Mears’s eyes, weaving in actual court records, letters and personal accounts.

Howell pursued a career in marketing and publishing after earning an M.F.A. in the Writers’ Workshop at the University of Iowa. His fiction has appeared in the Virginia Quarterly, Sewanee Review, Gettysburg Review and other publications.


ASHEBORO – Actress Mary Badham, who played Scout in the classic 1962 film adaptation of Harper Lee’s To Kill a Mockingbird, will appear at 7 p.m. Saturday, April 2, at the historic Sunset Theatre in downtown Asheboro.

Badham will share her experiences making the film, reflect on the book’s message of tolerance and compassion, and take audience questions.

Her appearance is sponsored by the Friends of the Library, the Heart of North Carolina Visitors Bureau, the City of Asheboro and The Courier-Tribune. It’s free and the public is invited.

Prior to Badham’s appearance,  a free showing of the film will take place at 2:30 p.m. at the Sunset for those who have not seen it or want to see it again.

Badham was chosen for the role of Scout at age 10, with no prior acting experience. She was nominated for a Best Actress in a Supporting Role Oscar for her performance.

After appearing in two other films, including This Property Is Condemned with Natalie Wood and Robert Redford, and TV shows Twilight Zone and Dr. Kildare, she left acting as a teenager to pursue her education.

She currently maintains a busy schedule talking to audiences internationally about the book and the film, and has twice appeared at the White House. Her interest is in expanding knowledge about the film’s message of social injustice and to insure that each generation of students can experience the film’s impact.

The Sunset Theatre is located at 234 Sunset Ave. For further information, contact the Asheboro Public Library at 318-6803.
Posted by Ross at 10:24 AM No comments:

Join the Spring Break fun at the Asheboro library

ASHEBORO – School will be out during the last week of March, so join in the Spring Break fun at the Asheboro Public Library.

All the events are free and all supplies will be provided.

Stewart, the daughter of sharecroppers, will share stories from the mid-20th Century, when “Y’all come sit-a-spell” was the call for agricultural workers to take a break from hard work in the fields, or to relax after church on a Sunday afternoon.

Stewart’s appearance is first in a series of visits by “Road Scholars” from the North Carolina Humanities Council’s Many Stories, One People project. It’s free and the public is invited.

Stewart, who lives in Raleigh, uses literary arts as a way to create better communication across age, race, gender and class lines. She has written three produced plays and her stories appear in several publications.

The project is made possible by funding from the North Carolina Humanities Council, a statewide nonprofit and affiliate of the National Endowment for the Humanities. Support is also provided by the Friends of the Library. 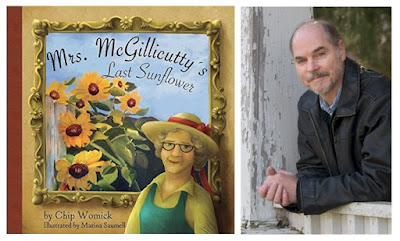 ASHEBORO – What happens when an elderly woman grows too frail plant her garden as usual, and the balance in the world shifts from beauty to ugliness?

Find out as journalist Chip Womick debuts his first children’s book, Mrs. McGillicutty’s Last Sunflower, beautifully illustrated by Argentinean artist Marina Saummell,  in an event that will feature a reading of the story and spring-related games and crafts, at 5:30 p.m. Tuesday, March 22, at the Asheboro Public Library. Womick also will answer audience questions.

It’s free and all ages are invited.

Womick has been writing mostly for newspapers — and mostly for The Courier-Tribune — for the last 30 years.

After penning Remembering Randolph County: Tales from the Center of the State, and assisting centenarian John Pugh with a memoir, he wanted to see on the printed page some of the children’s stories he has written. He hopes that Mrs. McGillicutty’s Last Sunflower is the first of many from his new publishing company, Peacelight Press (peacelightpress.com).

Play some music at Asheboro library jam session for teens

ASHEBORO  -- Bring your guitar or other instrument of choice and join singer-songwriter Gracie Kirkland for the first ever TeenZone Jam Club at 6 p.m. Thursday, March 17.

The jam session is free and all teens are invited to make some music.

Get smart about your credit report in Asheboro library program

ASHEBORO  -- Learn how to understand your credit report in “SmartCents: Credit to Be Proud Of” at 6 p.m. Tuesday, March 15, at the Asheboro Public Library.

Sponsored by the Friends of the Library, it’s free and the public is invited.

Tom Luzon of Consumer Credit Counseling Services of Greensboro will talk about how to read a credit report and understand the report’s terminology.

Participants will learn how to establish credit and dispute inaccurate credit reporting, and find out about their rights.

Attendees also can bring their credit report for personalized assistance from Luzon. Credit reports can be obtained for free at www.AnnualCreditReport.com (authorized by federal law and the only source for free credit reports), or by calling 877-322-8228.

Those bringing a credit report should keep it with them during the program, not let anyone else see it, and black out their social security number.