ASHEBORO – The old time/bluegrass team of Tommy Edwards and LaNelle Davis will present a selection of original and traditional seasonal tunes in “A Country Bluegrass Christmas,” 7 p.m. Tuesday, December 12, at the Asheboro Public Library.

Edwards and Davis will be joined by Stan Brown on banjo for the concert, which is sponsored by the Friends of the Library. It’s free and the public is invited.

Siler City native Edwards is lead singer/guitarist for The Bluegrass Experience, which he founded in 1971, and host of radio station Life 103.1’s “Bluegrass Saturday Night.”

A professional performer for over 35 years, Edwards has twice been named World Champion Bluegrass Guitarist. He’s also known as an outstanding songwriter.

He served for over 30 years in the Randolph and Chatham county school systems as an administrator, a teacher and coach. He and his wife, Cindy, also ran an antiques store in Pittsboro for over 25 years.

Davis, from eastern North Carolina, initially was drawn to clogging, and toured extensively as a dancer and caller. She took up the bass when a friend moved and left one in her house, and since has performed with numerous nationally-known old time bands and individuals. 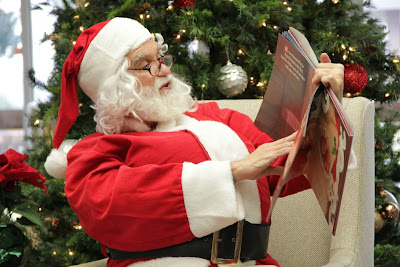 ASHEBORO – The Jolly Old Elf himself will appear at three libraries during early December to share stories and join in a variety of holiday activities.

At the Archdale Public Library, 10433 S. Main St., “Visit with Santa and Mrs. Santa Too” from 6:30-7:30 p.m. Thursday, December 7. Santa will read a holiday favorite, and children can decorate bookmarks and make an elf ornament.

The Asheboro Public Library, 201 Worth Street, will host its popular annual “Breakfast with Santa” at 9  a.m. Saturday, December 9. Santa will read a story; there will be a variety of Christmas activities and a group dance. The Friends of the Library will provide a light breakfast.

At the Randleman Public Library, 142 W. Academy St., “Santa Claus is Coming to the Library!” from 3:30-4:30 p.m. Thursday, December 14. Wear your holiday best and join in a Christmas activity with Santa.

Learn how to avoid scams in Asheboro library workshop

ASHEBORO – Learn how to avoid falling victim to various schemes and cons in “Don’t Get Scammed,” at 6:30 p.m. Tuesday, November 14, at the Asheboro Public Library.

Join Sgt. Charles Burrow of the Asheboro Police Department’s Community Resources Team as he discusses what steps you can take to prevent being the victim of various scams, including phone scams, real estate swindles and identity theft. He also will guide attendees through deciphering the signs of a scam.